Why Christians Should not Legislate the Bible

Most of the conservative Christians I've talked to are fiscally responsible people who support either Republicans or the Tea Party. Some of them want smaller government, some don't. Almost all of them support government bans on gay marriage, and drug use. Some of them go further and believe in prohibition style alcohol laws. If you are one of them, this message is to you. I plan on expressing and validating some of your concerns and then using a loosely biblical argument to convince you to stop legislating your morality on United State citizens.

The concerns that conservative Christians have that I believe are valid are that they don't want the government to come into their churches and force the pastors to marry gay people under some new anti-discrimination law. This is a valid concern, and neither I nor the libertarian party want to legislate what Christians do in their churches. Another similar concern that we share is when the government tries to force businesses to violate their religious beliefs to serve customers or employees. Businesses should be free to not serve gay people if they don't want to. If the market decides they are evil for it, let the consumers punish their business. The market could just as easily reward them for it if the consumers are religious or believe in their cause also.

The government should not legislate Christian morality on United States citizens either. In the bible, in Genesis, God creates Adam and Eve in his own image with the ability to choose their own good or evil actions. This is called free will. God specifically made us different than animals in this regard.

26 Then God said, “Let us make human beings[b] in our image, to be like us. They will reign over the fish in the sea, the birds in the sky, the livestock, all the wild animals on the earth,[c] and the small animals that scurry along the ground.”
27So God created human beings[d] in his own image.
In the image of God he created them;
male and female he created them.
Genesis Chapter 2 (NLT)
15 The Lord God placed the man in the Garden of Eden to tend and watch over it. 16 But the Lord God warned him, “You may freely eat the fruit of every tree in the garden— 17 except the tree of the knowledge of good and evil. If you eat its fruit, you are sure to die.”

This clearly shows that Adam has a choice. Do you think God made the wrong decision to give us the ability to choose? Do you think he should have simply made us only capable of doing what is right and good? I think he knew what he was doing (God by definition knows everything). However, a key requirement of free will is not only the ability to make good choices, but also bad ones.

Okay, you've signed onto free will is a great, God given ability. Now I'm going to call your attempts to take away the free will of individuals worse then the sins you think they will commit if you don't legislate your morality on them. Using force to make others do what you think is good is called crusading and jihad. When you try to make gay marriage or drugs illegal, you are using the same line of thought that crusaders and radical Muslims use to justify using force against anybody who disagreed with them on religious grounds. Taking away a humans free will is an insult to the image that God created us in.

What do I think we should do? Don't make laws regarding who can be married and who can't. Get rid of the books worth of tax codes that have to do with marriage. Let the laws of reality deal with drug users; if you use drugs and then hurt somebody, then you can go to jail for hurting someone rather than for doing drugs. Christians should convert by example and reason rather than force.

This is why I side with Libertarians rather then the tea party. I don't sanction gay marriage, but I don't believe in legislating the use of government force against it. I don't use drugs, but I don't have a problem with my neighbor peacefully using drugs in their home. From an economic perspective, the role of drug laws is to keep drug cartels in business. To conclude, if you don't like gay marriage, then don't get one. If you don't like drugs, don't use them. If you don't like your choices being taken away, don't try to take others' choices away from them. 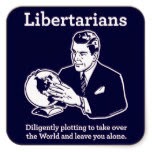 Are you a Libertarian?

Are you a Libertarian?
Take The Quiz to find out.

If you are, then join the LP!